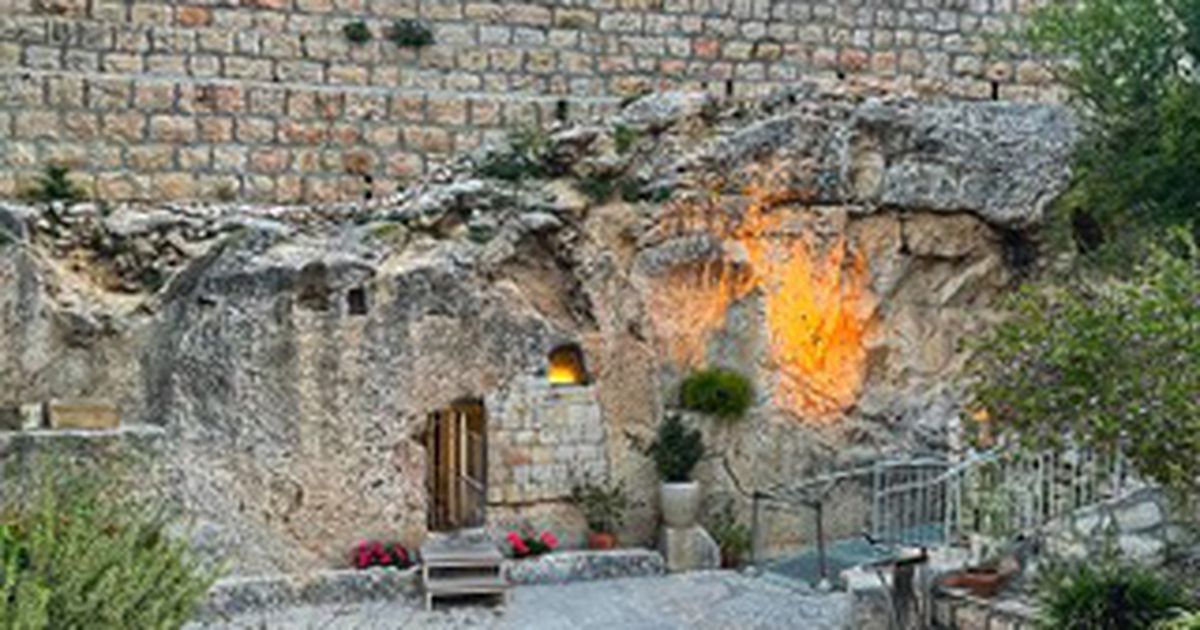 The scripture says that Jesus was resurrected, but from where? On this Easter morning, the exact location does not matter.

Postcard from Peggy: Christians are flocking to these traditional holy sites in East Jerusalem for the first time in three years.

(Michael Stack | Special for The Tribune) Easter morning sunrise at the Garden Tomb in East Jerusalem on Sunday, April 17, 2022.

East Jerusalem • Hundreds of Christians line up in the dark dawn here, eagerly awaiting the start of the first Easter service in three years at the Garden Tomb.

As they spin through the garden and find seats along the driveway or on the raised patio, where the service is centered, a host – echoing what the angel said to Mary in the biblical account of the resurrection of Jesus – said to them enthusiastically, “He is not here, Amen.

If you thought more literally, however, this may not be the right physical location where the scripture says that Christ rose from the tomb on Easter morning.

The sites of his crucifixion and burial have traditionally been located under the current Church of the Holy Sepulcher in Old Jerusalem, says Eric D. Huntsman, academic director of the Center for Near Eastern Studies at Brigham Young University in Jerusalem.

(Michael Stack | Special for The Tribune) Example of a Christ-era tomb in the Church of the Holy Sepulcher on Sunday, April 17, 2022

After his Christian conversion, Constantine had the Temple of Venus dismantled and found a tomb underneath which was identified as “the supposed resting place of Jesus”, writes Huntsman in his next volume with Trevan Hatch, “Greater Love Hath No Man: A Latter A Day Saints Guide to Celebrating the Easter Season. “The emperor then had an impressive complex of churches built on the site, which included a commemorative rotunda… and a large basilica.”

Between the two, writes the Latter-day Saint scholar, was a place called “the sacred garden”, which resembled that described in the New Testament, with a “rock of Golgotha ​​now exposed in its southeast corner “.

(Michael Stack | Special for The Tribune) The Golgotha ​​(skull) rock inside the Church of the Holy Sepulchre, where some Christians believe Christ was crucified, Sunday, April 17, 2022.

At the time, the site was outside the city walls, but now it is in the center of the ancient city.

the Garden Tomba site much more familiar to Latter-day Saints and evangelical Protestants, was discovered in the mid-19th century and within two decades was embraced by many as the burial and resurrection site of Jesus.

The rock-cut tomb still sits beyond the city, with its own Golgotha, or Skull Hill, towering above the tour buses (although its brochure notes that the “crucifixion would not have been at the top of the hill but rather by the side of the road. He was crucified alongside two robbers in front of a mocking crowd”). The tomb is not enclosed in a church, but the site is run by an independent not-for-profit organization of British Christians.

(Michael Stack | Special for The Tribune) Skull Hill (Golgotha), where some believe Christ was crucified in East Jerusalem, Sunday, April 17, 2022.

The Holy Sepulcher has “tradition and archeology behind it,” says Huntsman, while the Garden Tomb provides a setting more “conducive to feeling the spirit and remembering that first Easter morning.”

In the end, “it doesn’t matter which one is correct. We commemorate the event, not the place,” he says. “The faith of the people who worshiped here makes both sites sacred.”

It certainly doesn’t seem to matter to those Christians who watch the sun rise over the Garden Tomb on Sundays.

They sing their joy at the resurrection, accompanied by guitars. They shout, “He is truly risen” and “Hallelujah!” to the statements of the New Testament. They swing and pray with the Reverend Stephen Bridge, a British Baptist who runs the site and gives the sermon. They take selfies with the rocky gate in the background, suggesting an empty tomb.

“Transformation comes by walking with Christ,” Bridge intones. “I believe He is here, standing in our midst, with the power to heal now and the grace to forgive.”

After 10 days in the Holy Land, I come to better understand what draws pilgrims from three world faiths to Jerusalem. For them, this is where the infinite and the finite meet—whether in Jesus, Muhammad, or Abraham; in sacred practices like Easter, Ramadan or Passover; or in an ancient tomb, mosque or holy of holies. It is both ordinary and rare. It happened a long time ago and yet continues to move them. History is past but also very much alive here.

Who wouldn’t want to glimpse or touch such a sacred place, even for a moment?

(Michael Stack | Special for The Tribune) Site in the Church of the Holy Sepulchre, where some believe Christ’s tomb was, Sunday, April 17, 2022.