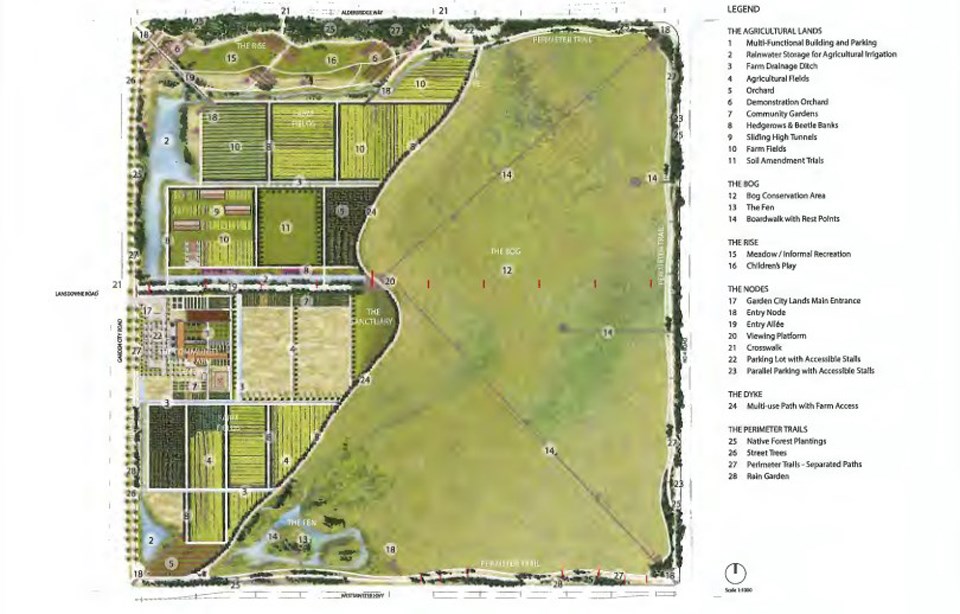 The City of Richmond is seeking approval from the ALC to allow agricultural and environmental activities on 136 acres of land downtown.

Boardwalks over the bog, a watchtower, an agricultural-themed play area on a mound – as well as three parking areas – are some of the features planned for Garden City Lands.

But a food hub and an ecological interpretation center – to support agriculture and peatland health and rehabilitation – are proposed as a central project for the site.

This center is envisioned by city staff as resembling a typical farm barn, but would include a food preparation area and a commercial kitchen.

It is called the “Garden City Lands Agricultural and Ecology Center” in a report for city ​​council parks and recreation meeting next week.

“This would support the Centre’s function as a ‘food hub’ in downtown Richmond,” the report read.

Just weeks after 200 garden plots opened on the 136-acre site in downtown Richmond, city staff are asking council to approve an application to the Agricultural Lands Commission (ALC) to add these features , allowing more public access.

But the plans also include parking areas – on-street parking on No 4 Road, a small car park near Alderbridge Way and 64 parking spaces near the Garden City Road Community Gardens.

From a shooting range to an ecological site

With a long history of various uses, the city is currently conducting soil surveys to see if there is any residual contamination on the Garden City lands.

The site was used as a shooting range at the beginning of the last century. Additionally, there were once underground fuel tanks for transmission towers on the grounds of Garden City.

In their report, city staff say the plans support the dual mission of the Garden City Lands, that is, the agricultural and food aspect and the ecological aspect.

The east side of the lot is covered in bog, and the city has proposed building raised boardwalks to cross the bog without disturbing the “ecologically sensitive” area. Also, the area is expected to be covered in water throughout the year, making it unsuitable for land routes.

The playground is planned for the northeast corner of the lot – across from Wal-Mart.